She was and still is being ably and morally supported by her Late Grandmother Mrs Rani Bedi, her mother Mrs Letezia Bedi and her Aunt Mrs Adarsh Arora. It is solely because of this support that she was able to give it the necessary start in the year 2003.

The Society finally got the necessary impetus after having been joined by some like minded and dedicated people, like Mr Satyajeev Singh Bedi, her brother, Mr Kapil Chahal ,her husband, and Ms Rohina Thapa, an Educationist. It was formally registered in the year 2004 which lead to the formation of the first Society run School, namely the Kangra Valley Senior Secondary School affiliated to the Himachal Pradesh Board of Secondary Education. It was Inaugurated by Major Vijay Singh Mankotia, the Hon’bl Minister for Tourism Himachal Pradesh in March 2004.

The school has since grown from strength to strength and has today carved a niche for itself amongst the top schools in Dharamshala area and today can boast of a strength of 450 plus students, and caters to all the streams namely Arts, Science and Commerce with a staff that is dedicated to ensure, achieve and realize the aim of the establishment of the Institution, that of the overall development of the child/student.Another commitment of the Society has been the aspect of Environmental awareness and its degradation. The Society, through its school children has been active in promoting the message against Environmental degradation by taking up the activity of cleaning up the nearby Khuds, and also participating in the anti Polythene drives organized, both, by the Governmental agencies and own Societal initiatives. The Society, through its school children has also partaken in the movement for the promotion of New and Renewable Energy on the occasion of the World Environment day Celebrations held at Dharamshala wherein one of the students has also spoken on the subject at a Public Seminar. The Society has also been promoting the use of Sustainable Energy by holding Chaupal sittings in collaboration with various Panchayats of the surrounding areas as well as taken initiative in conducting Seminars in promoting Renewables as a whole.

Thereafter the Society entered into the field of the Sarva Shiksha Abhiyan launched by the Government of India and introduced the concept of free Computer Education in their School. The School also took up the onus of picking up children from the underprivileged section of the society specially, those, who showed the necessary aptitude, and today can boast of sustaining 35 such students completely by providing them with, education, books, and meals, all at the cost of the Society.As a continuing effort in this direction, the Society is now in the process of setting up a primary education center for the children of the Socially underprivileged section of the Society, for providing totally free education, along with provision of meals, free books and the establishment of the necessary library of books and toys for the toddlers respectively. Initially it is proposed to start with the UKG, LKG, and the 1st to 3rd standards.

The Society had also launched a drive for the welfare of the local and Rural masses by holding free medical check up camps in the surrounding areas, as well as some of the surrounding schools. Free medicines were distributed during these camps. Specialists in the fields of ENT, Eye, Surgery, General Medicine etc. from the Zonal Hospital, Dharamshala were invited for the camps who enthusiastically assisted the Society in the successful conduction of these camps under the banner of Help Age, an arm of the Society that catered to the needs for such activities.

As the name suggests Help Age also turned its attention to stray Animals, especially cows and mules, left to die after they have fulfilled the needs of their owners and are unable to provide for with further profits to  their masters, Stray dogs and their ever increasing population were another area of concern which was taken care of, with the help of the veterinaries, and education of the masses towards the adoption of the litter of such dogs. It was encouraging to see people responding to this with a very positive attitude and the Society successfully provided homes to about 250 such puppies. The Society had also held meetings with various Panchayat seniors and advised them for the setting up of Gowshalas for such cows as were old and left to spend their remaining life at the mercy of the natural elements.

The Society initiated a self sustaining project of establishing a couple of boutiques which helped generate employment and provided sustenance to a group of rural women folk. At present the Society is working on the implementation of another self sustaining project of knitting to generate further avenues for employment to women folk in the rural areas. With respect to employment generation the Society is proposing to set up an agro based food processing unit in a nearby rural area that will ensure employment generation for the women there as well as to the educated youth of the area while aiding the economic development of that area.

The society marked another milestone by starting Kangra Valley Achievers’ Public School in April2014;which follows the Central Board of Secondary Education pattern.Presently it caters to the students till Class Fifth;and soon will be upgraded to Secondary level. Kangra Valley Achievers’ Public School, is devoted to developing its students  into individuals of wisdom who are committed to pursuing excellence.
Over ten years of history in Dhramshala, Kangra Valley Public Education Society  has maintained its cherished culture of trust and respect for the individual, characterized by a strong sense of identity and community.  It has been witness to the rise of the city and contributed to community by grooming generations of all-rounded and civic-minded individuals, many of whom have marked a niche for themselves in our community.  This can only have been due to the excellent leadership of the School Management Committee, the dedication of the principal and teachers and the support of parents. 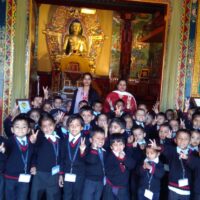 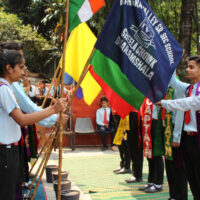 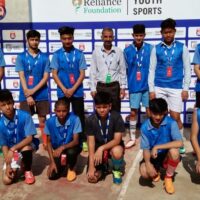